The importance of CA room accessories

Prepare for the sunburn season

Early and even application of Surround—well before heat events—is essential for superior performance and productivity.

A grower-conducted trial on over 30,000 trees has demonstrated again that choosing the best sunburn protection product and applying it correctly can dramatically improve grower returns. The use of traps with an insect sex pheromone lure is the simplest and most accurate way to monitor pests.

The presence (or absence) of these pests in the orchard can be detected and monitored. 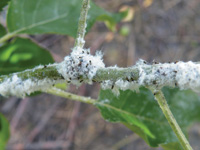 Woolly apple aphid (Eriosoma lanigerum) is usually considered a ‘secondary’ pest of apple trees, but it appears to be increasing across Australia.

The extreme heat a couple of seasons ago—and the heavy fruit losses that resulted—should not be forgotten because now is the time to protect fruit from such damage.

The last 12 months of mild temperatures and plenty of rain is a stark contrast to the 2008–09 and 2009–10 seasons where we experienced low rainfall and extreme temperatures resulting in significant levels of sunburnt fruit.

There was very little requirement for sunburn protectants last season and it will be interesting to see what this summer brings.

Codling moth Cydia pomonella is the principal insect pest of pome fruit in Australia and can damage almost the entire crop if not controlled.

Control of codling moth is the key to almost all other pest programs in pome fruit orchards since many chemicals commonly used to control codling moth have adverse effects on beneficial insects.

Welcome to the first IPM Practitioner.

This is a series of articles about practical IPM—the IPM carried out by orchardists and advisors—those of us walking the crops monitoring and seeing what is out there and advising on pest, disease and weed control.

Harvest time is under way again

Fruit going into storage needs to be handled carefully to avoid injury.

Sanitation is a priority to minimise infection from pathogenic spores.

For the last 20-30 years packhouse managers have only had a small number of fungicides available for controlling storeage rots. This resulted in reduced sensitivity to these fungicides and resistance problems.